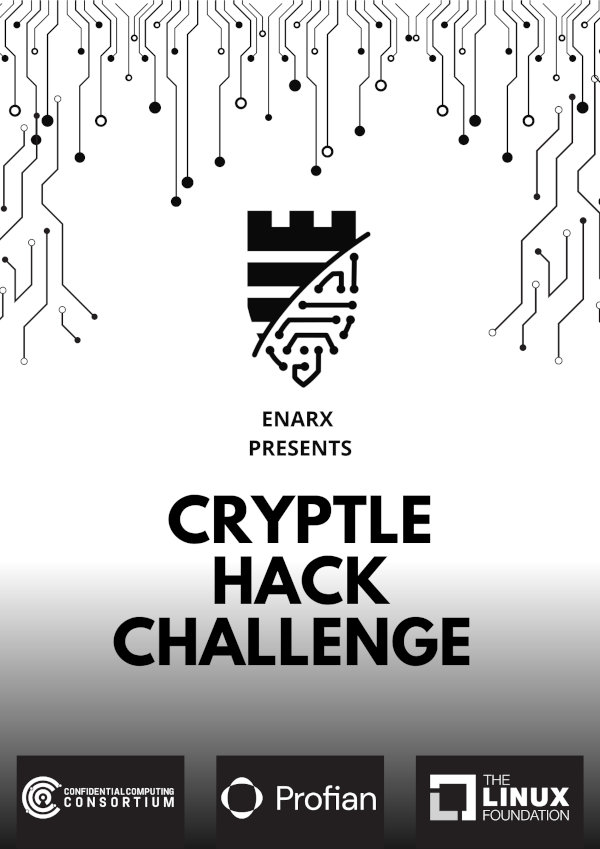 The Enarx project, which is part of the Confidential Computing Consortium from the Linux Foundation, welcomes participants to the Cryptle Hack Challenge.

The goal of Cryptle is to demonstrate data encryption in use, where the processing of the data is done in a Trusted Execution Environment (TEE), and only accessible to the Cryptle application.

Single Player is similar to Wordle. A player has to guess a five-letter secret word (selected by the application), with yellow/green colored titles shown as hints in each round, indicating letters that match with the secret word.

In the Multi Player mode, the secret word is not selected by the application itself, but instead is (or rather are) suggested by the players themselves. Each player proposes words that are most likely to match those sent by others. The words are sent to the Cryptle application running in an Enarx Keep (a specific TEE instance) and are only revealed to the players when there’s a match between the secret words.

The Hack Challenge provides a more elaborate way to engage with the game: players may write an open source application to run on the host side with root privileges. The goal remains the same: to guess the secret words. Further information is provided below:

The mechanism chosen to “hack” Enarx and derive the secret words is up to the implementer, but the application must be available as open source (under an OSI-approved license) either in GitHub or GitLab, initially shared privately with the Enarx team following responsible vulnerability disclosure.

It may be written in any programming language, but should not be intentionally obfuscated.

Documentation should be provided to show how the application is able to “guess” or derive the secret words.

After your code and documentation have been reviewed, we will execute your application with root privileges on the same server where Enarx and Cryptle are running.

The application will be run for a total of 15 minutes.

Real players and/or bots will be submitting a list of secret words to the Cryptle application during this period.

The host will be running a modern Linux kernel.

The application will be run as an ELF binary.

No physical access to the host will be allowed or provided.

The Hack Challenge judges will evaluate the results and contact the player.

The following are out of scope vulnerabilities:

Prizes will be awarded to players who have successfully “hacked” Enarx within the scope described above.

The prizes will vary according to the vulnerability found.

Prizes will range from electronics (such as Raspberry Pis, drones, and laptops), conference tickets (including travel expenses), to cash prizes.

Cash prizes will be awarded in partnership with the Linux Foundation’s LFX Crowdfunding platform.

The Cryptle Hack Challenge will be promoted at the following conferences attended by the Enarx team:

August 6, 2022: Black Hat
Winners of the first round of the Cryptle Hack Challenge announced

August 11, 2022: DEF CON
Launch of the second round of the Cryptle Hack Challenge

November 30, 2022: All Things Open
Winners of the second round announced
Closing ceremony of the Cryptle Hack Challenge